A Launch in Record Time 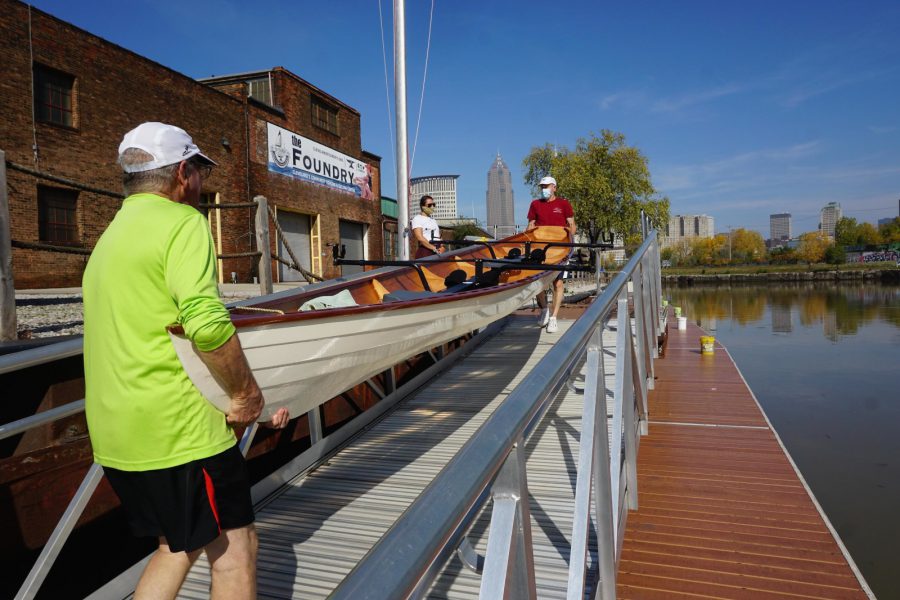 Brothers Tom and David Wagner launched their 19ft tandem Annapolis Wherry on a sunny October 22nd afternoon and may have set a CABBS speed record for a boatbuilding project. Started in mid-July, they assembled the Chesapeake Lightcraft kit at the CABBS Columbus Rd workspace and completed it in three months. “I really wanted to get it in the water before the winter” Tom said. 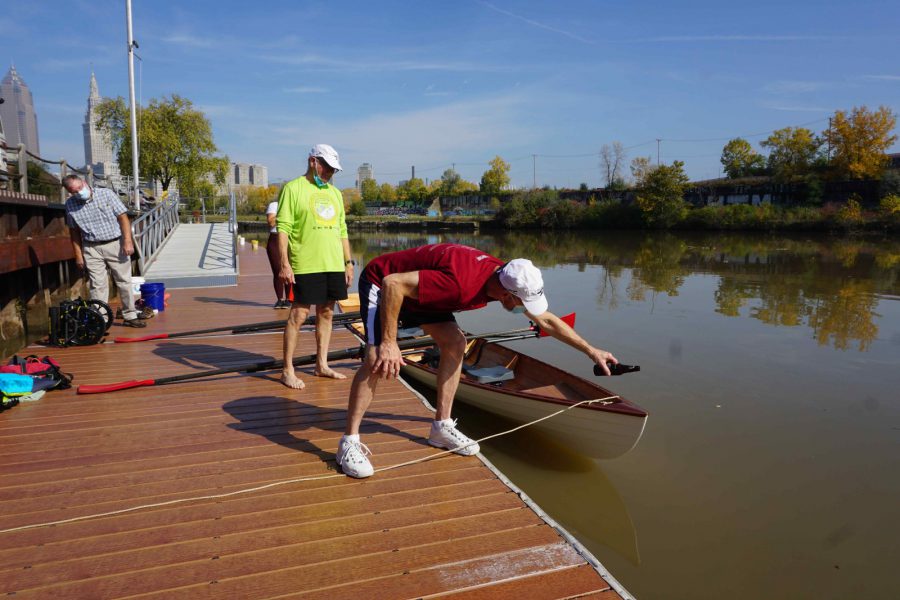 David Wagner christens EDNA with a bottle of Great Lakes Brewery Burning River Ale at the Foundry boatdock as Tom Wagner looks on. Tom Baugher peeks in for a view.

David drove in from Medina and Tom from Lakewood and found the workspace very conducive to their needs. The stitch and glue kit came together without a problem. Both men had built a model version of the boat before starting.

Their biggest problem had to do with sags in the epoxy coating of the interior. When they left for the night, the coating looked even but by morning it responded to gravity’s tuggings. By rolling the epoxy on with a thin foam roller rather than using a foam brush and squeegee they obtained much more even results.

The boat is finished off in Hatteras White by Interlux. They went with a gloss varnish on the gunwales and a satin finish on the interior. Tom sourced a set of used carbon fiber oars from a Detroit rowing club and followed his wife Malinda Smyth’s advice to paint the blades red. 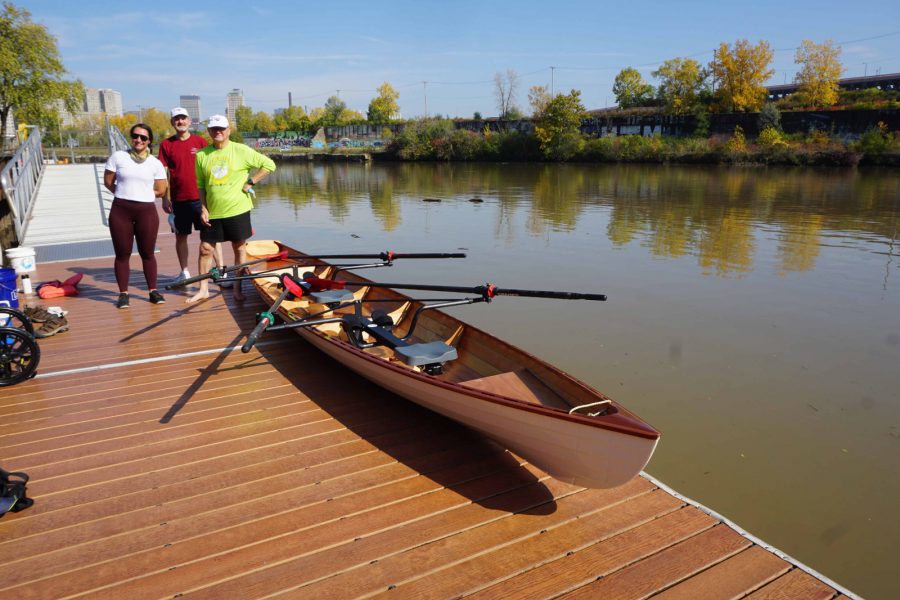 The brothers will row EDNA, named for their mother, primarily on the Cuyahoga. Both have taken rowing lessons at the Foundry Rowing Center which they found to be very valuable. With all its turns, uneven banks, and commercial traffic, the Cuyahoga presents many challenges. “If you can row on the Cuyahoga, you can row anywhere” Tom said. They talk about a rear-view mirror accessory. Tom is also working on his ‘elevator speech’ to have a ready reply to the many admiring remarks from onlookers. 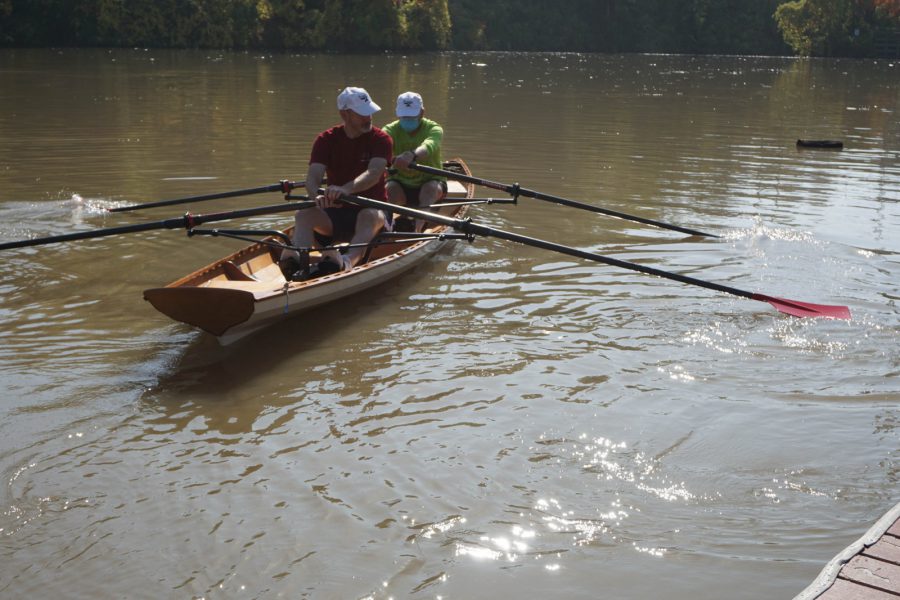 And they are off!

Other family members are eager to give the boat a try. Tom hopes to find permanent storage for the boat in the Columbus Rd peninsula area. He has a small boat dolly which makes it easy to move the boat and walk it down the street to the launch site. 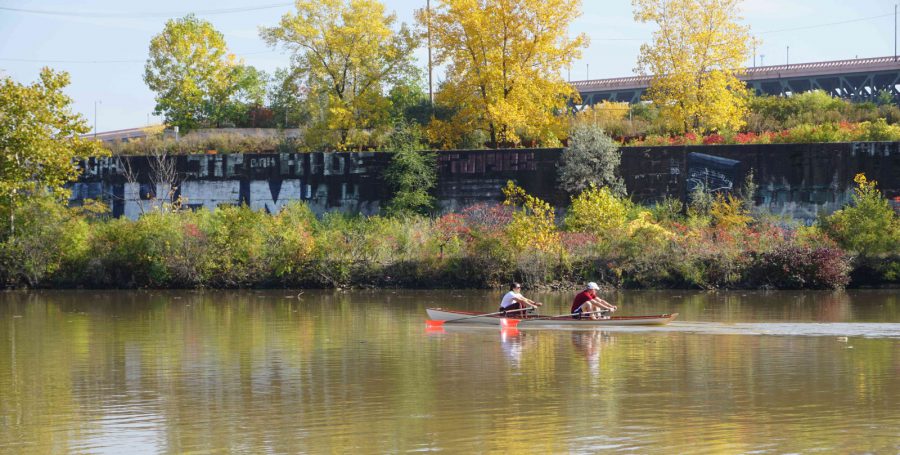 Three months start to splash that’s what is going in the CABBS records books for the Wagner brothers and EDNA. We hate to see them go from the workspace. We will miss their company.