A Year in Paradise 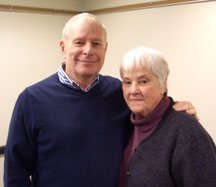 For one year, Stephen and Margaret Watterson lived a dream. All of us have dreamt of a cruising adventure to someplace far away but few of us have invested the time and resources into the first practical steps that can get us to a departure date. Steve and Margaret, residents of Bay Village, had been Lake Erie sailors for ten years when a few years ago, they departed for the Florida Keys from a Sandusky marina, leaving in mid-July. They had planned the trip for a few years and scaled it to their interests, their budget, and most importantly their sailing skills and abilities. 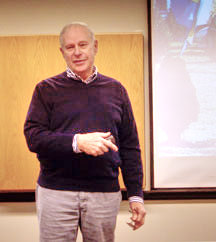 Giving a very lively, energetic, and humorous presentation Steve told how he, Margaret and their shipmate, a cat named Pukka, began their adventure by sailing their 30 ft. Beneteau to the Buffalo area. There the mast was pulled and stowed on deck. They entered the Erie Canal and used the waterway to motor in festive style across New York State to the Hudson.

Following the Hudson to New York City harbor, they sailed south out onto the ocean to Cape May, New Jersey. They tucked around the cape and headed northwest into upper Delaware Bay. There they entered the C&D Canal which got them to the Chesapeake. They spent Labor Day in Baltimore. Heading south through the Chesapeake, they took a side cruise up the Potomac to visit Washington, DC, then headed south to Norfolk and the start of the Intercoastal Waterway. The intercoastal would be their route south to Miami, Florida. 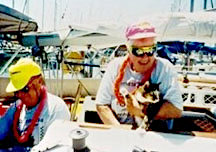 The Intercoastal Waterway with its connection of protected waters provided them with a sheltered route for passage making during the day and the convenience of channel anchorages and marina services at night. Steve estimated they sailed only 20% of the time during the trip. Their trusty diesel engine which pushed them along at 6 -7 knots sipped less than a half-gallon of fuel per hour.

By Christmas time they were along the Florida coast. Arriving in Miami, they ventured through Biscayne Bay to Boot Key Harbor in Marathon, their winter base for further exploration of the keys.

After six weeks in the keys it was time to up anchor and reverse the direction of their travels. They retraced their route north, following the advancing line of Spring, to return to their home slip, one year and a day to the date they left.

Stephen wrote a book about their adventure, A Year in Paradise, illustrated with many maps and photos. It is an excellent resource for planning an extended cruise.  It inspires by recounting the joys of the trip but also provides the specific, detailed, even mundane information necessary to plan and replicate a similar trip. The book can be purchased through Amazon. The book is also available through the CABBS library.