And now for something completely different: A Hovercraft 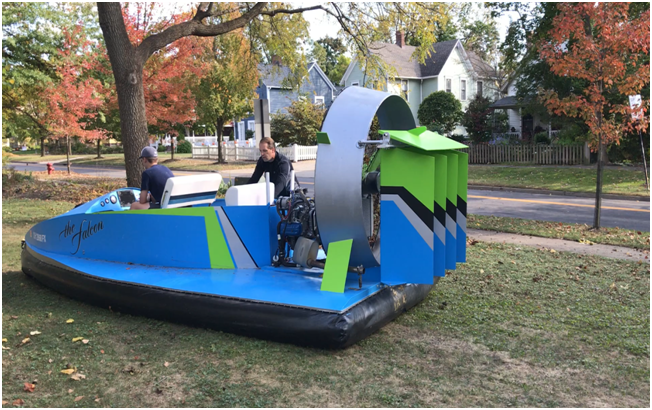 Mike and Noah Madar, our November Meeting guest speakers, levitated us into totally new territory.   A little over a year ago, Mike Madar’s wife said he needed a father-son project for their son, Noah. What could be cooler than a hovercraft? He bought the plans from Universal Hovercraft in Rockford, Illinois and cleared the garage.

The project became a daunting climb involving wood and foam construction, automotive engine mechanics, and metal fabrication. The four pages of plans left far too much detail to the builder’s discretion, a particularly baffling situation for these two first-time boatbuilders. Mike and Noah soon learned why their rep at Universal Hovecraft said that less than 10% of those ordering plans actually finish the craft. 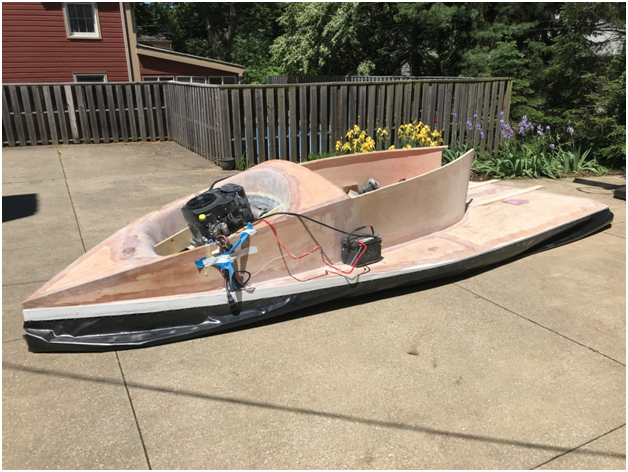 Working in their cramped 12ft X 20ft garage in Hudson, they built the hull, installed the reinforced rubberized nylon skirt, installed a 23 horsepower Kohler engine for the lift fan and a 1983 Subaru 4 cylinder 90 hp engine for the pusher fan. 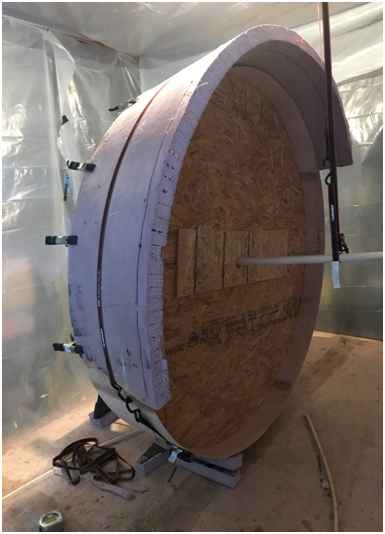 There first attempt at testing the boat in water drew the immediate attention of an ODNR officer who just happened to be close by. Mike soon found out that not only did the boat need registration, there are only four bodies of water in Ohio that allow the use of hovercraft. Mike and Noah were able to fit in only two other shakedown runs before the end of the 2019 boating season.

Mike describes driving the hovercraft as driving a car with four flat tires on ice. If that’s not enough, it has no reverse. Getting the boat on and off a trailer is a challenge since the craft looses lift once it is in an inclined position.

What is so exceptional about this father-son duo is their unrelenting problem-solving, their tenacious grip on moving the project forward, and their unwavering perseverance to essentially complete the project in a year’s time. They need a medal or trophy for their accomplishment.

We hope to see their craft, THE FALCON, on Lake Erie this summer. I doubt that spotting it at a distance we would ever confuse it for something else.