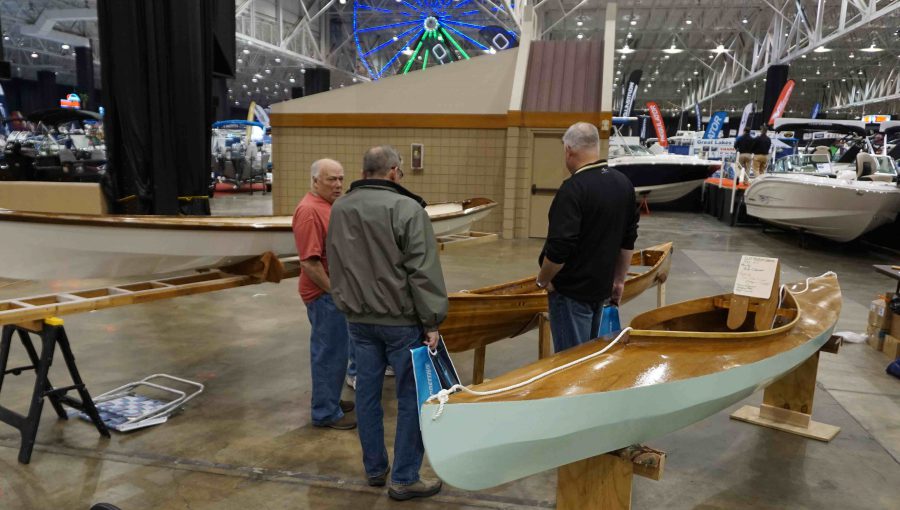 Let’s start with this year’s kid’s model boat, a sailing catamaran designed by Jerry Priebe.  The CABBS kid’s boatbuilding workshop is a legendary feature of the boat show.  CABBS members led by program director Mike Latham cut the parts to make over 300 kits which kids of all ages assembled. 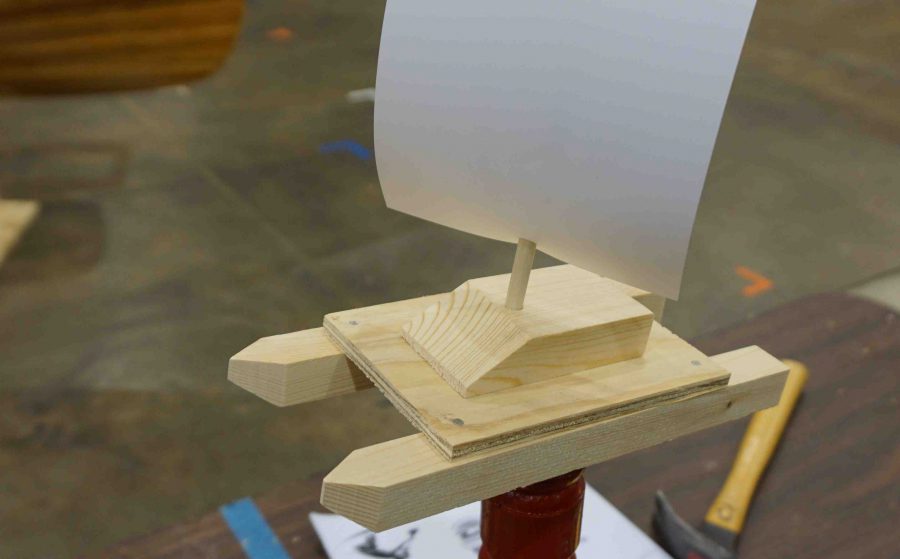 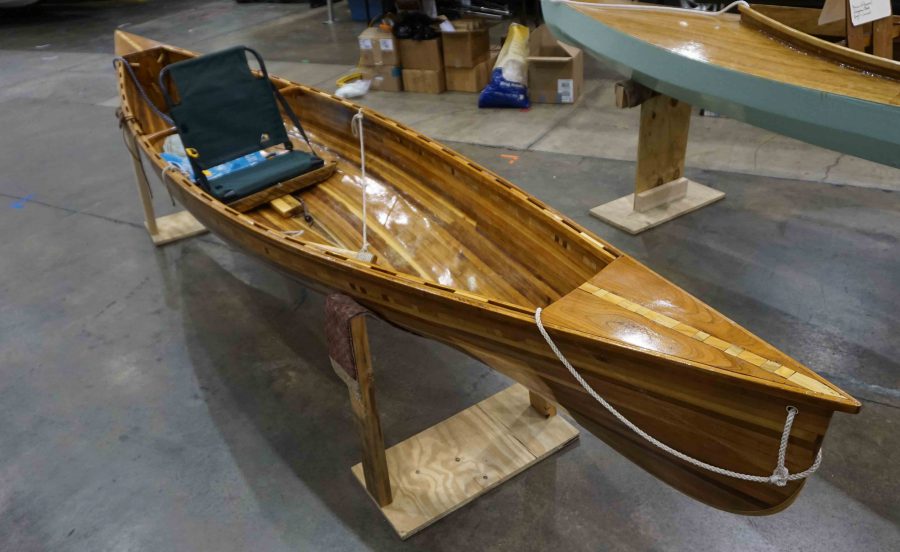 The boat contains a secret message.  Using short segments of alternating light and dark wood as if they were  Morse code dots and dashes he encoded his daughter Marie’s name along the length of the boat.  He left his own signature on the piece, encoding ‘Jim’ in the bow and stern decks.

Jim built the boat during this past summer in his backyard shed.  The boat is sheathed both in and out in fiberglass cloth set in epoxy.  It weighs about 40 lbs.

Jim said he just loves it and so did many in the crowd, the boat drew a lot of admiring comments.  Many wondered how one could put it in the water and endure getting it scratched and dinged.  Based on the condition of the seat and foot brace the canoe is seeing use while still keeping her good looks. 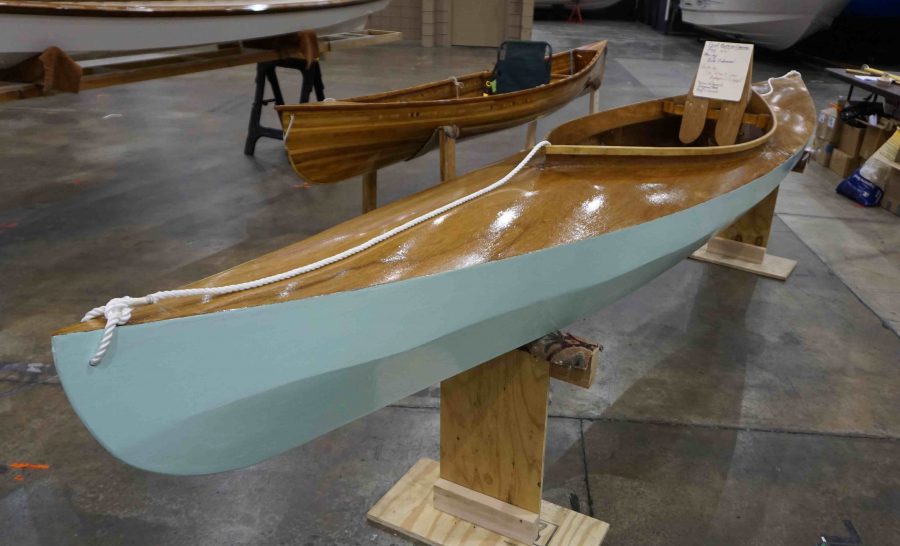 A Fox built by Joe Lose

Joe Lose worked under Jim Batteiger’s supervision at Jim’s shop and built this Bill Thomas Fox design.  The flat bottomed, decked canoe is built stitch and glue from plans. He started in October and put in 3 -4 hours a day, about three days a week to complete it by Christmas.

For 81 year-old Joe Lose this is the second boat he built.  It is far, far better than his first effort produced about 70 years ago as a kid.

The boat has yet to touch water.   Officers at the ODNR display booth next to CABBS offered to inspect the boat and process the paperwork to register the boat.  Sometime this spring Joe will grab a paddle, push off and fully enjoy his accomplishment. 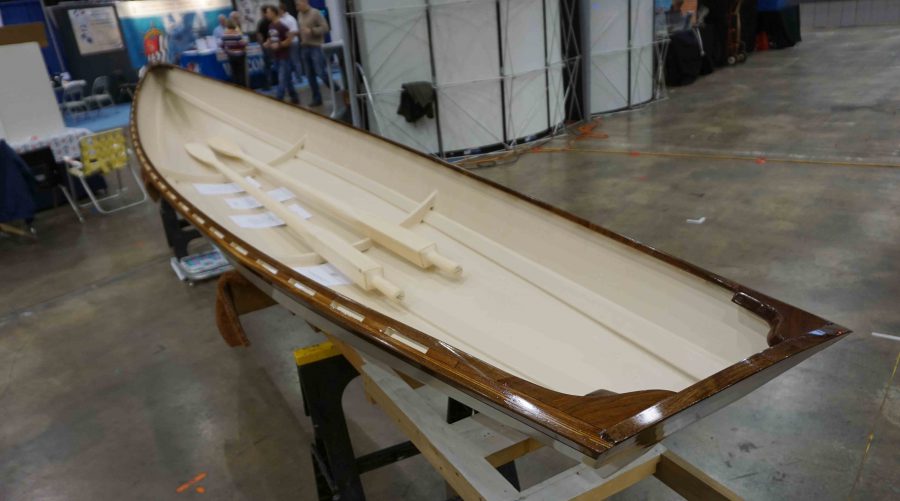 A Firefly built by Ed Neal

Ed nearly completed all the paint and varnish work before the weather turned cold and he could no longer work in his barn loft workspace.  In the meantime, he turned his attention to the oars, crafting the ten footers out of spruce.  He based the oars on a Pete Culler design and estimates each oar will weigh about a pound and a half more than a carbon-fiber off-the-shelf equivalent, yet cost 1/20th  the price.

Over the past two years, Ed has been building the boat for his wife, Susan Lewis.  He is working toward a Spring launch.  She told him he better get it done before her arthritis gets ahead his progress. 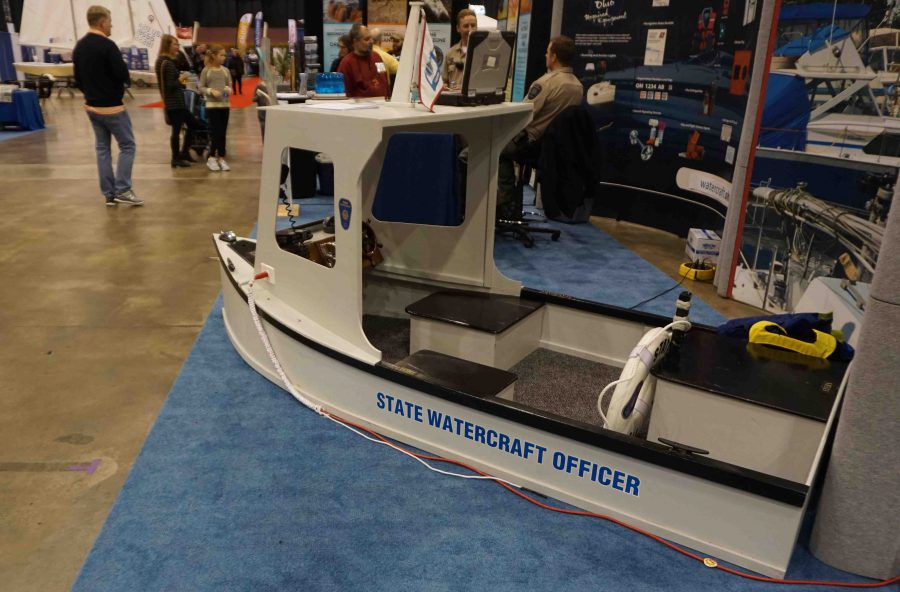 A kids activity boat designed by Hank Vincenti and built by Hank and CABBS members.

Not everyone knew there was a fifth CABBS boat at the show.

The CABBS built Big Tow kid’s play boat added a big draw to The Ohio Department of Natural Resources (ODNR) display.  By chance, the ODNR booth was next door to us on the aisle.  CABBS member, the late Hank Vincenti, designed Big Tow for the ODNR’s lakefront community center near Bratenahl.  Hank led a small CABBS team who handled the boat’s construction and installation.

The boat’s pilot house is equipped with a spoke wheel, CB radio, throttle levers and flies a CABBS burgee.  It  provided instant imaginative play for the little ones.  Many parents at the show got a breather as their kids engaged themselves in boat driving antics.

ODNR is putting in the effort to keep Big Tow in top condition.   Any one in CABBS who worked on the original project would be proud to see it fulfilling its original mission and carrying on the spirit of its designer.

A big thank you goes out to everyone who contributed to this year’s booth display.  And a special toot on the steam whistle for Jim Batteiger who led the boat show effort and put in many hours organizing it, setting up the booth, manning it, and taking it down.  He’ll be storing Captain CABBS and parts till next year.