You didn’t need the fastest boat but it helped. During the 1920’s, Prohibition outlawed alcoholic beverages in the USA. But few stopped drinking. Many relied on smugglers who ran Canadian booze across the lake into Ohio. For the smugglers, there was big money to be made.

The United States Coast Guard operated picket boat patrols to squelch the traffic. Yet many evaded their grasp. Extraordinary amounts of money could be made shuttling quality liquor, legally purchased in Canada, across the lake on moonless nights and landed at secluded inlets and beaches. Sometimes the Coast Guard fired upon suspects. 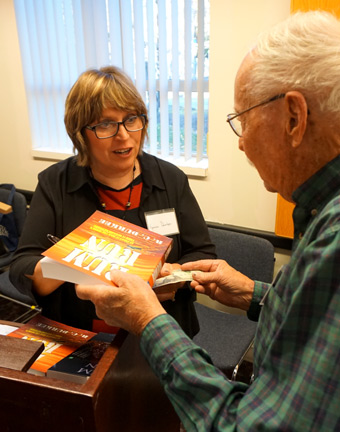 Our November meeting guest speaker, Renee Durkee is the author of Rum Run, a novel about Lake Erie smuggling during Prohibition. A Grafton resident, she gave a vivid portrayal of the market forces that lead many men into smuggling. She illustrated her talk with historical photos. She also displayed additional photos and newspaper articles as well as a model of a Lake Erie rum running boat based on a Lyman hull.

Smugglers purchased their inventory from buy-ships that served as floating liquor warehouses, anchored at Pelee Island or Middle Island just over the international boundary. They had ingenious schemes for hiding booze in hidden compartments. Some packed whiskey bottles into burlap bags and sunk them along-side fishing nets to be retrieved later when the timing was right for a dash across the lake.

Renee Durkee’s book, Rum Run, is set in the Lake Erie Islands and weaves together many elements of her historical research. The story follows Rusty, a tug boat deckhand working the Lorain harbor. Suddenly unemployed, he finds opportunity as a South Bass Island grape juice transporter. As his innocence falls away he becomes a fully invested smuggler. He builds his own exceptionally fast boat. He powers it with a World War I aircraft engine and armors it with steel plate. Eventually, he will have a desperate run-in with the Coast Guard.

Ms. Durkee’s novel involves many places along the lake familiar to CABBS members. Knowing these settings brings a particularly vivid dimension to the story. Throw in some very likeable characters and many historical facts and you have a good yarn for the fireside.

Rum Run is available on-line through Amazon or through Moonshine Cove Publishing, LLC.