If there is one bad boy of weather it is hot, moist air. It is the foundation on which thunderstorms and hurricanes develop. Kirk Lombardy and other weather specialists at the NOAA office based at Cleveland Hopkins Airport, keenly observe these bad boys to fulfill the number one mission of the NOAA: to issue public severe weather warnings. In addition to warning us about thunderstorms they are responsible for issuing warnings on tornados, flash floods, winter storms and blizzards, high winds, and gale conditions on Lake Erie.

During the night, satellites keep track of cloud cover using infrared imaging that reads the varying temperature of the cloud layer. 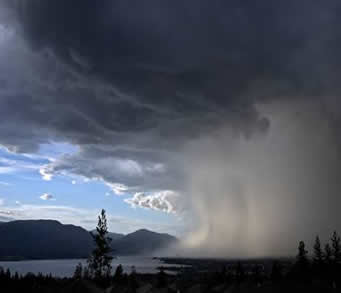 Kirk explained that a thunderstorm originates in an updraft of rising air. As the air rises it forms a vertical growing cloud. It continues to rise to a point where the high speed winds aloft blow the top of the cloud horizontally preventing it from rising further. As it cools, rain forms and creates a downdraft of cool sinking air triggering storm conditions. A typical thunderstorm is approximately 15 miles in diameter and lasts for 30 minutes. At any given time there are over 1,800 thunderstorms occurring around the world. Some parameters of a thunderstorm rated as severe are hail larger than ¾” and winds above 58 MPH.

Kirk touched on tornado formation. Tornados can form when a low level horizontal jet stream is diverted vertically by colliding with the edge of a updraft of warm rising air. The vertical stream begins the conditions for a funnel to form.

The NOAA is responsible for issuing flash flood warnings. A key danger of a flash flood is driving through water of an unknown depth. Two feet of water is sufficient to float a car and by attempting to ford through flood waters, the car could be floated off the roadway and swept into dangerous conditions before it eventually takes on enough water to sink.

Kirk encourages everyone to have a weather radio in the bedroom in the event that a severe weather condition develops during the night. Should the NOAA issue a severe thunderstorm or tornado warning, the weather radio will set off an alarm to awake the sleepers.

Current weather reports for Lake Erie can be found at: http://tgftp.nws.noaa.gov/data/raw/fz/fzus51.kcle.nsh.cle.txt