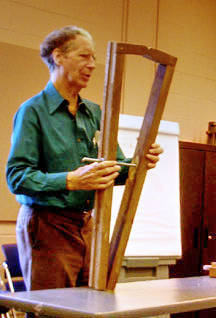 John Bridges’ boatbuilding resume  tallies twenty-five boats, quite a performance for an amateur builder. His interest in boating started a young boy living on the Isle of Wight in England. The varnished tenders of magnificent yachts would pull up on the beach and John like other boys his age would earn a few coins by tending the boats, keeping them from getting damaged while the owners performed shoreside duties.

John’s professional carreer as a forestry products technologist took him to different parts of the world and as John said, he left a trail of Optimist dinghies where ever he went. In Kenya, he sailed on a lake that featured three hippopotamuses. He had to be very careful where he beached since the creatures could easily walk on and destroy a boat.

In Trinidad John took on his most ambition effort, creating a Chinese junk for the Disney studios. He worked from sketches by Disney artists to design a sailing junk built over the hull of another boat. The 90 ft. boat, carvel planked from pitch pine was featured in the 1960 movie Swiss Family Robinson.  Also for the film John built two longboats using plans for those used aboard the BOUNTY sailed by Captain Bligh. 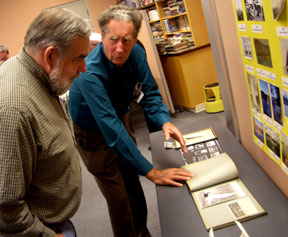 John met his wife, Sheila, through their mutual interest in sailing. They spent time cruising the Caribbean from their home base in Trinidad.

Over the years John has accumulated a vast store of boatbuilding anecdotes and insight as he has built to a variety of designs: catamaran, daysailer, punt, dory, skiff, and Flying Dutchman class design. He does not shy away from taking on a challenge and building an unusual boat. 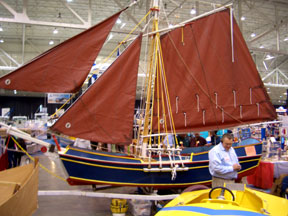 His latest boat, SWIFTSURE, completed in 2007, is a scaled-down replica of a 1750’s English revenue cutter. But there is a bit of a hidden motive at work in his choice of design. As John stated, getting crew out for a sail can be difficult. If you call someone and ask them to come out for a sail on a 16 ft. daysailer you may get a polite, “Sorry, busy.” If you call and ask them to sail in your 1750’s English revenue cutter, you find you get far fewer turn downs. As John said, “it is easy to get crew for unusual boats.”