Building Masts and Spars by the Bird‘s Mouth Method 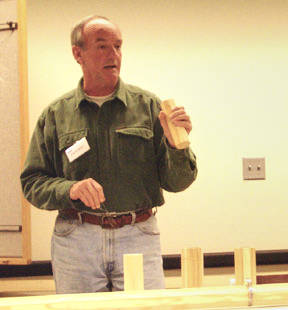 Ric Altfather’s clear explanations and finely crafted samples took the mystery out of building lightweight yet very strong masts and spars by the bird’s mouth method. Now that we know the magician’s tricks, we all want to go home and try it out ourselves.

Ric’s interest in the subject began when he wanted to build a mast for a sailing canoe. An avid canoeist and meticulous craftsman, he developed a few tools and jigs to make it a nearly frustration-free process. 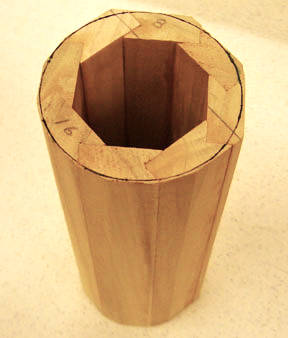 The mast is created by epoxy gluing eight wooden staves the length of the mast to form a hollow tube. The edges are planed and sanded to form a circular cross section. That’s the big picture. The trick is dimensioning the staves and gluing them into a circle.

First, Ric gave the formula for the size of stave. Divide the outside diameter of the mast you want to build by 2.5. This gives you the width of the stave. The stave thickness is then one-half the stave width. For example: to create a 3.5” diameter mast, divide 3.5 by 2.5 to get 1.4”, the width of the stave. The thickness is one-half the width or 0.7”. Converting these decimals to fractions produces a stave roughly 1 and 7/16” by just under ¾” thick. Ric states it is OK to round up dimensions because the oversize can be sanded away.

A table saw with the blade set to 45 degrees, is used to cut a kerf halfway through one stave edge. The stave is flipped end to end and run back through the saw to make the second 45 degree cut to create the bird’s mouth profile. A tiny ridge of wood is left at the apex of the cut that can be easily cut out by striping it with a craft knife. Featherboards are a must to keep the wood stripes firmly in contact with the table and the fence.

To make a tapered mast, a taper is cut in each stave along the edge opposite the bird’s mouth. The taper can be cut on a bandsaw and then edge planed. 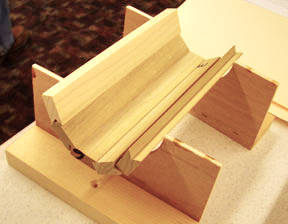 To make the glue up a simpler process, Ric made several jigs cut a bit oversize to the diameter of the mast. The jig can easily cradle five or six of the staves.

Epoxy is applied to the bird’s mouth. The staves can be ganged together on a table with the mouth side up to make it easier to paint in the glue. 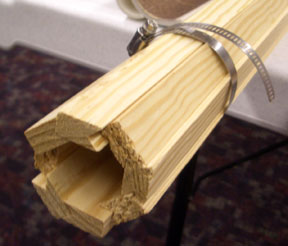 Screw band clamps are used at 18” intervals to clamp the staves together. Start at one end and work toward the other, setting the clamps with a bit or socket in an electric drill to speed the snug up.

Ric showed two jigs to make the sanding easier. The first is a halfpipe cut from a scrap of PVC pipe and lined with course sandpaper having a pressure sensitive adhesive backing. 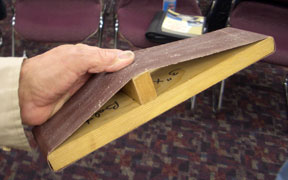 The second is a conventional sanding belt spread by a flat piece of wood. A second piece of wood, slipped in at a right angle acts as a wedge to tighten it. Sanding is done on the elevated belt areas which can conform to the shape of the mast.

Now was that as hard as you thought?