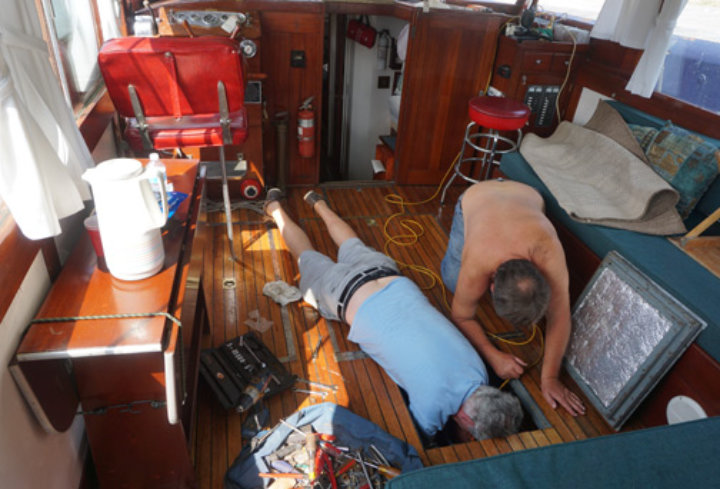 Mile upon mile came and went when suddenly a loud metallic scraping sound arose above the steady drone of the engine. Phil lost engine power. Something happened to the transmission. Looking around Phil spotted a docking spot about 100 yards away along the town wall of Newark, New York.

We were able to coast in and tie up. By the time I had the shore power connected Phil and Jim popped the engine hatches open and extended a trouble light to examine the propeller shaft.

The possibility of being marooned, dead in the water, 75 miles from home weighed heavily. Talk focused on the transmission coupling to the propeller shaft. It appeared the key, a quarter inch square piece of bronze, an inch and a half long, had disintegrated and no longer connected the shaft.

Sweating profusely from the high humidity and working in a very confined space, Phil struggled with a number of wrenches to get at the four bolts and disassemble the coupling.

Now where could we get a new key? How about the NAPA auto parts store less than 100 yards away on the first street up from the dock.

The guys at the store cut a piece of bar stock to our needs. It cost about six bucks.

Now it was Jim’s turn at the wrenches. He drove the key into place and  re-bolted the coupling.

Now the test. Will it hold? Was anything else damaged? Were there other more serious problems that caused this mishap in the first place?

With a safety line attached to the dock in case we had to pull ourselves back in, we fired the engine and put the boat in gear. She drove forward as naturally as she had before.

We shoved off. Of all the places where we could have broken down we were incredibly lucky to have it happen by a town dock and within walking distance of a parts store. Heidi was indeed good to us.