The Ship that Built Cleveland

Les and Kathy Weston gave a slide talk on the history and restoration of the Great Lakes freighter WILLIAM G. MATHER . The boat was side launched May 23, 1925 at Ecorse, Michigan. At 618 ft. in length, 62 ft. beam and depth of 32 ft. it had a carrying capacity of 14,000 tons. The boat carried the name of William G. Mather, a chairman of the Cleveland Cliffs Iron Company during the early part of the twentieth century. The boat served as the Cleveland Cliffs flagship for many years and primarily carried cargos of iron ore or coal in four hold sections. Guest staterooms and a guest dining room in the bow section of the boat allowed favored guests to enjoy a few days passage in great comfort.

In 1954 the boat was refitted with oil- fired boilers powering steam turbines. Underway, fuel economy was approximately 26 gals of fuel oil per mile. In 1964, bowtrusters were added to give the boat greater maneuverability in tight quarters such as the Cuyahoga River.

In 1980 the boat was decommissioned and in 1987 it was donated to the Great Lakes Historical Society. In 1991 it opened as a museum ship.

Thousands and thousands of volunteer hours have gone into restoring the boat. Les and Kathy have done their share. Paint had to be stripped to reveal beautiful wood paneling or brass piping and fixtures. Damage from a fire set by a vagrant while the boat was idled on the Cuyahoga had to be rebuilt or restored. The engine room needed serious cleaning. The hull had to be sandblasted and repainted with primer and two finish coats. CABBS member Wes Roepke put in many volunteer hours himself in the mid-nineties.

The boat is dubbed, “the boat that built Cleveland” alluding to the wealth creation role played by lake freighters in the city’s history,  Many carried iron ore, coal, or limestone.

Today, the boat is moored on the lakefront behind the Great Lakes Science Center where an adjoining parking lot makes it easy for visitors and volunteers to gain quick access to the boat. It is one of only four Great Lakes freighter museum ships in existence.

The 2006 visitors season begins May 6 and runs through October.
For more information call 216-574-6262 or visit their Facebook page. 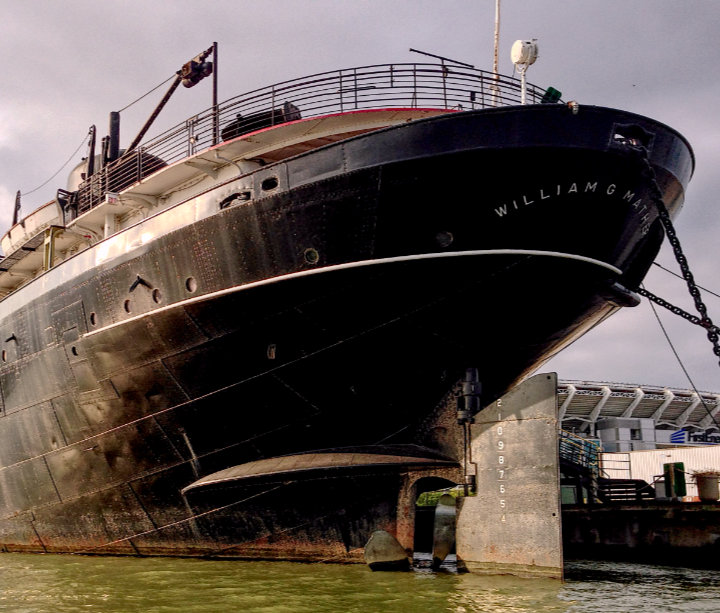