The Cuyahoga River, a 100 mile long ribbon of water that starts by flowing south and then u-turns north to empty into Lake Erie, is a national reference point in environmental history. In the early 20th century heyday of industrial-scale manufacturing, oil refining, and steel production, business interests turned the lower portions of the river into an industrial sewer. No one at the time expected blue heron, kingfishers, blue gills and willows to co-exist with steel mills and chemical plants. Today, we do.

We all know the story of how the Cuyahoga caught fire in 1969 and catalyzed the nation to finally move beyond a stuporous infatuation with industrialization and confront our degraded environment. What is not commonly known is that this was possibly the twelfth time the river had caught fire since 1868. A Case Western Reserve University student who had researched this topic for a college history paper, noted that over the years, many rivers had caught fire in American industrial cities. Buffalo, Chicago, Houston, Detroit, New York, and areas of New Jersey, all experienced fires on their industrial rivers. What appears to be uncommon in our case, is not that the Cuyahoga caught fire, but that the fire caused us to wake up and change.

“Stewards of the River”

Elaine Marsh and the Friends of the Crooked River organization see their mission as stewards of the river. Their role is to monitor actions affecting the river so the “fishable and swimmable” standards of the Clean Water Act are upheld and enforced. Elaine explained that in the early days of the Clean Water Act, it was assumed that by restricting chemicals entering a river, water quality would be restored. When this didn’t happen as expected, new research strategies and new technologies were developed to find answers. The focus turned to achieving a better understanding of river dynamics and the important link of water flow dynamics and habitat structure. More and more attention began to focus on dams and the negative influences dams create.

Over the past 160 years, dams had been constructed on the Cuyahoga to provide early hydro-mechanical power, create reservoirs, or divert water to flood the Ohio Canal. In Kent, a sandstone block dam originally built in 1836, was rebuilt in 1925 for the purpose of creating an artificial waterfall to add aesthetic interest to the small town’s business district.

Ms. Marsh used the city of Kent dam on the Cuyahoga as an example of a successful dam elimination project. In 1998, the EPA informed the city of Kent that water quality issues on its section of the Cuyahoga would require the city to modify its water reclamation facility to meet compliance. The city created a nineteen member panel to investigate how to best solve the problem. Working collaboratively, the group developed plans to disassemble the dam and thereby quickly restore water quality. The plans also kept a portion of the dam to retain the historic waterfall that had been a cultural feature of the city. The drained pool area behind the dam was turned into a heritage park area. 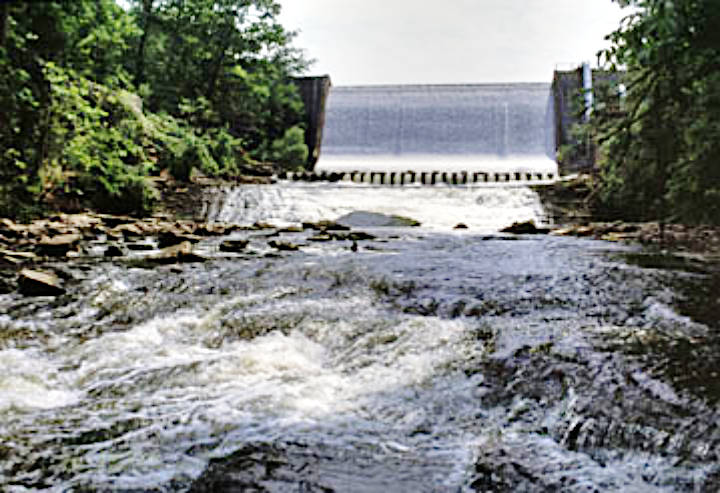 Currently, the Friends of the Crooked River group is challenging a proposed hydro-electric project in Gorge Park, a Summit County park on the Cuyahoga. Advanced Hydro Solutions (AHS), a limited liability corporation formed in 2003, wants to upgrade the 1917 built Ohio Edison dam located in the park to generate enough electricity to power 1,000 – 2, 000 homes. Although Ohio Edison shut down the hydro and coal fired electric generation operations at the dam in 1992 after six decades of spotty off and on use (partially due to unpredictable water flows) AHS wants to build new infrastructure to generate electricity. The new construction would deface the current park ambiance. The generated electricity wouldn’t be enough to power even 1% of Summit county’s homes, yet AHS is still pushing the idea through the regulatory channels. In public hearings attended by nearly 400 people, representing local government, state government, concerned citizens and environmental groups, over sixty people have spoken out against the project and no one other than AHS has supported it. Elaine concluded by asking CABBS members to help the Cuyahoga by helping to stop this project.

For more information you can go to Friends of the Crooked River’s website . A special page is devoted to the Gorge Park Dam controversy including information aboutcontacting the appropriate government officials to express your concern. Advanced Hydro Solutions presents their side.