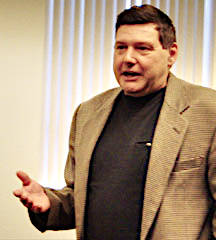 Ray spent a portion of his life sailing as a cook and steward aboard Great Lakes freighters of the Oglebay Norton fleet. He transferred his skills ashore and today, he operates the Great Lakes Cafe in Port Clinton just over the Rt 163 bridge.

While aboard ship, he witnessed a number of heavy weather situations and luckily for the CABBS members at the meeting who saw his finely crafted video, he had a video camera on a number of occasions to record the severity. Ray’s footage of his galley being destroyed by refrigerators sliding wildly eight feet one way then eight feet the other as the boat rolled trapped parallel to storm driven waves, is enough to make one thankful for firm ground underfoot.

Ray’s comments regarding ships and locales hint at an encyclopedic level of Great Lakes’ knowledge. He has furnished his café with memorabilia of Great Lakes shipping including a fleet flag that had belonged to the EDMUND FITZGERALD. Through his lively talk and professionally produced video, Ray interested many CABBS members in putting a stop at his café on their to-do list, the next time they are in the islands/ Sandusky Bay area.

P.S. Ray recommends Boatnerd.com as a gateway website to anything related to Great Lakes shipping.